So Mike and I decided we wanted to play Infinity again – this time using 300 point forces.  Coincidentally, we realized that the Tournament scenarios go posted so we decided to try one out! 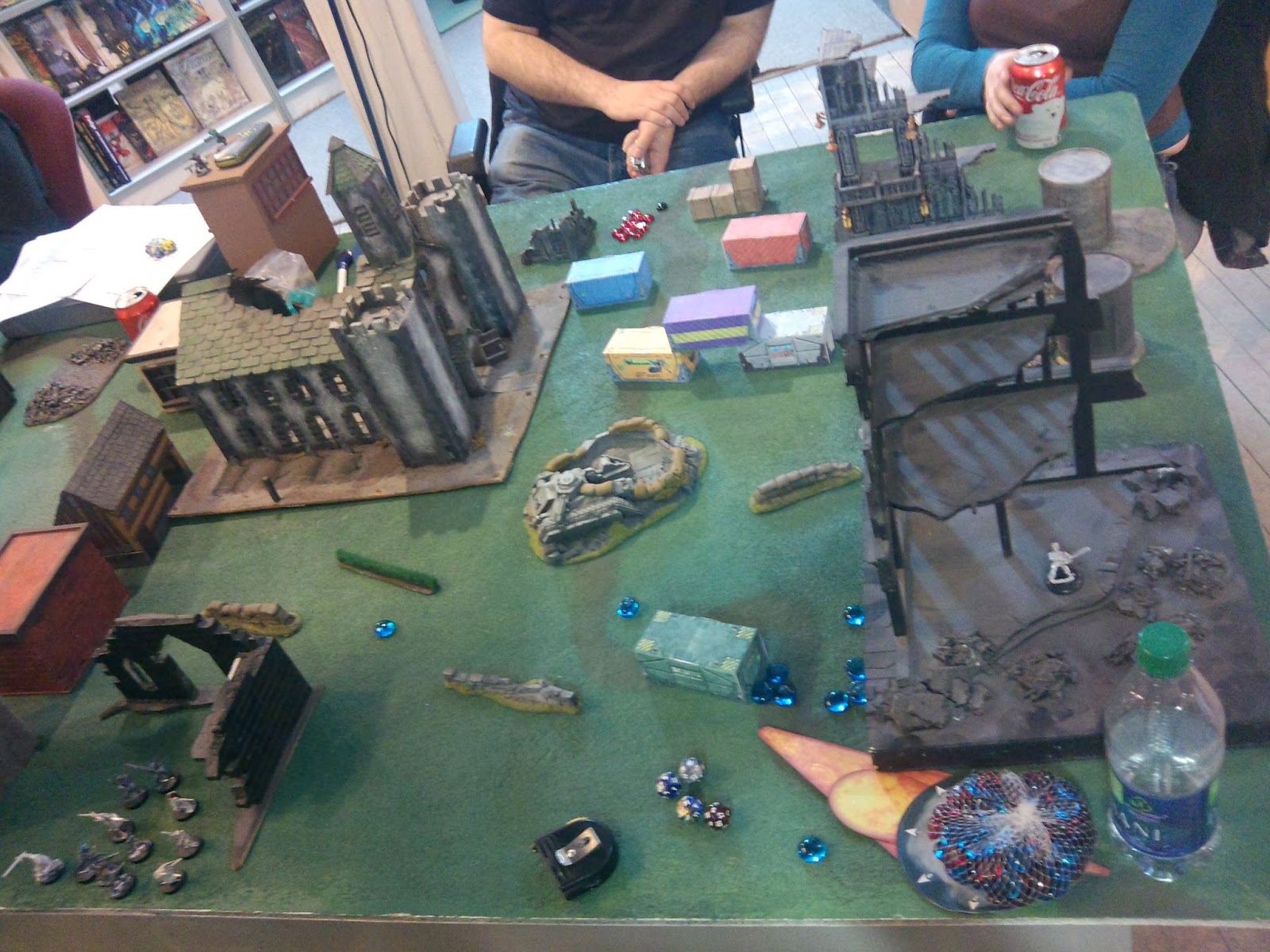 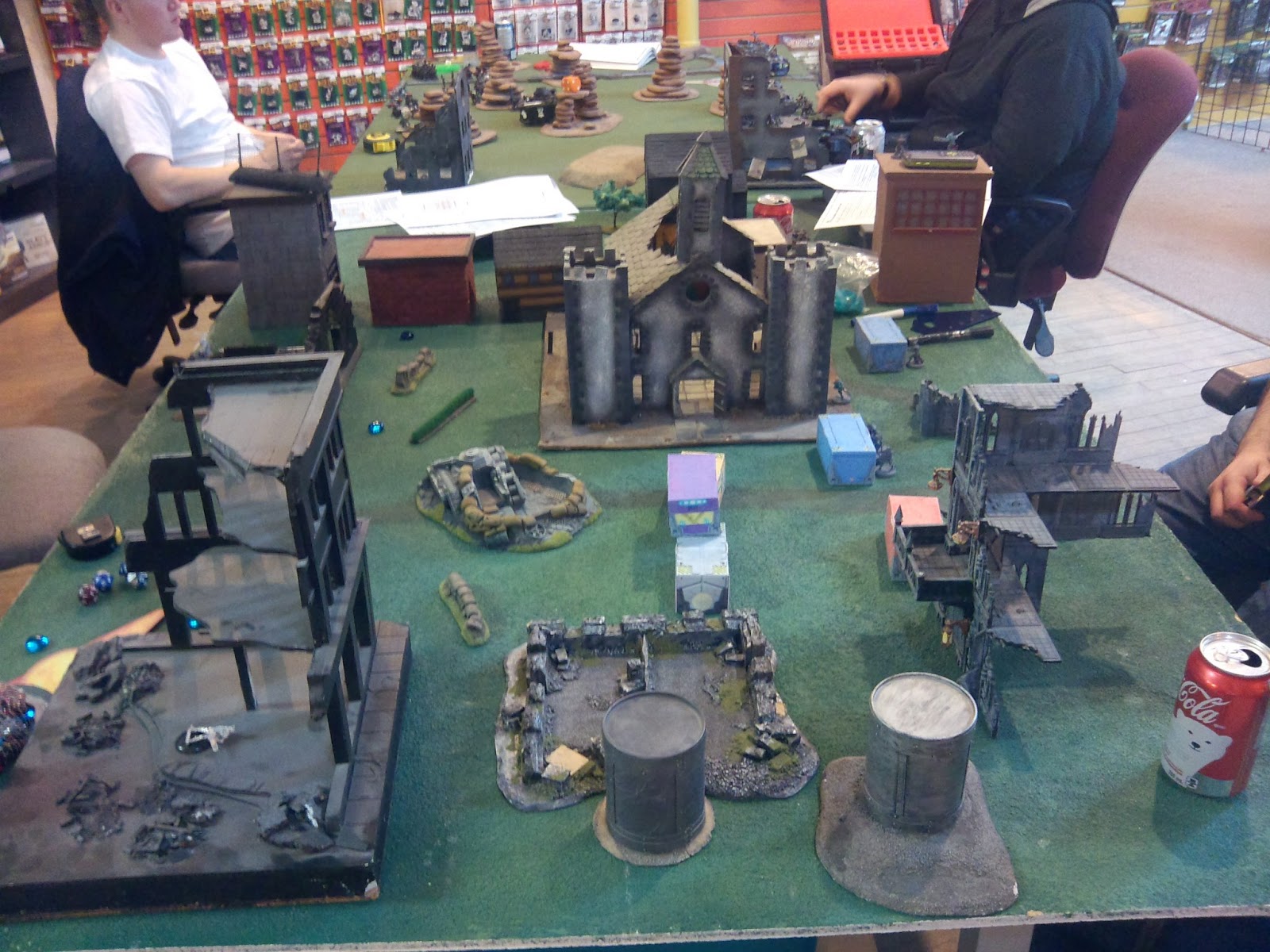 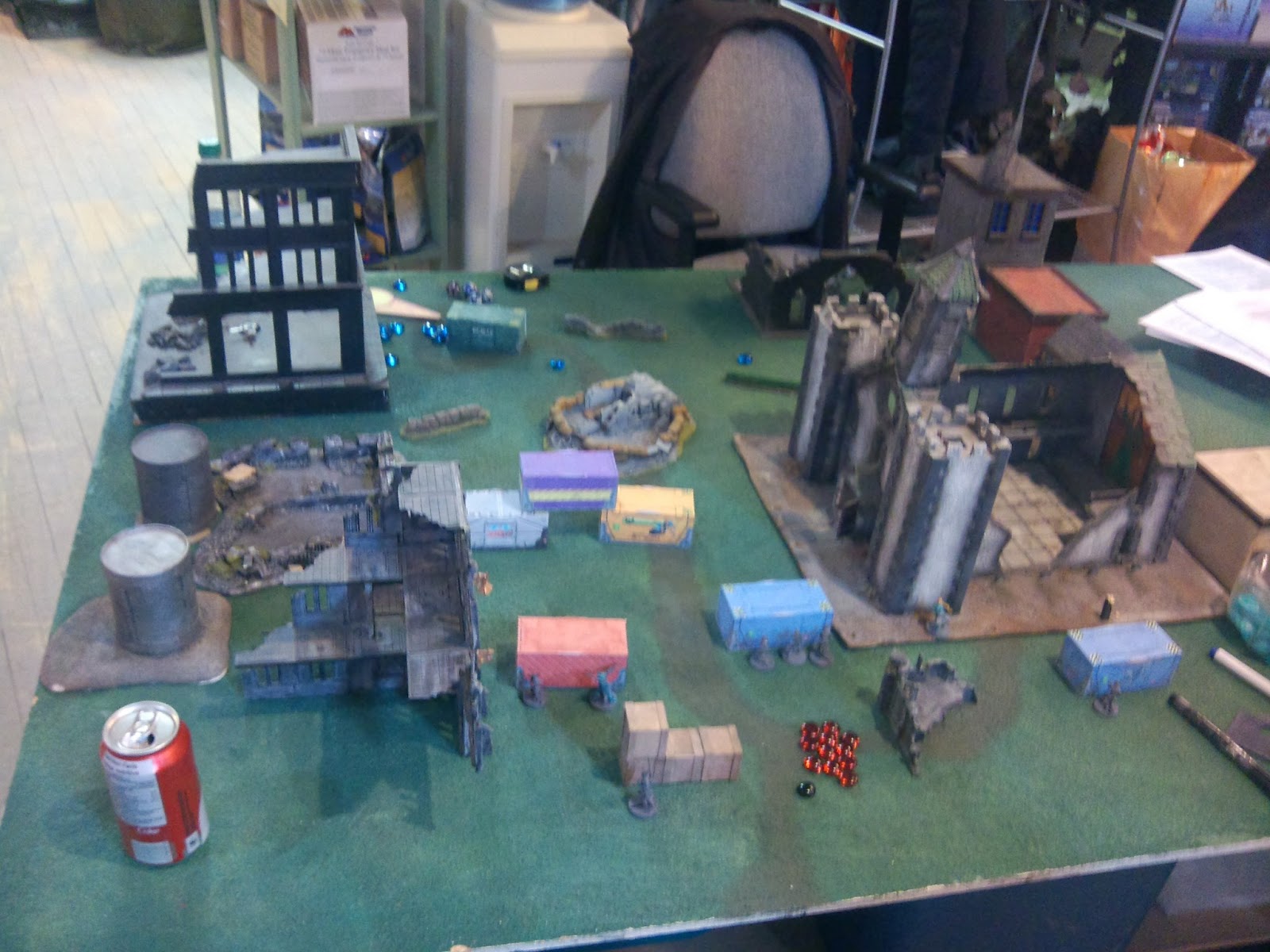 So another PanOceana training mission begins!


The area between the Deployment Zones are divided into 3 bands, each 8” wide.  1 Objective Point is awarded for controlling the band closest to your deployment zone, 2 OPs for the Center band and 3 OPs for controlling the band farthest away.  To control the band, the player must have the most points-worth of troops in the band.  Each player rolled for a “Secret Objective”, worth 1 OP.  Mike’s special mission was to gain “Telemetry”, succeed a Forward Observer Marking Roll against an enemy model.  Unfortunately, he didn’t have anything with FO ability, so it was a wasted mission.  My special mission was to do a “Data Scan” – do a successful hacking roll against an enemy hacker, HI, REM or TAG.


Turn 1:
I won initiative, so I took 1st activation.  My Knights, the Orc, the Auxilia and the Hacker all advanced up the left side behind the church, the two Knights and the Orc hiding behind a hedge row, the Auxilia and Hacker up against the Church.  The Orc with the HMG tried to provide covering fire.  The only other movement was the Croc Sniper climbing to the 2nd floor on the building on my right.  No shots fired. 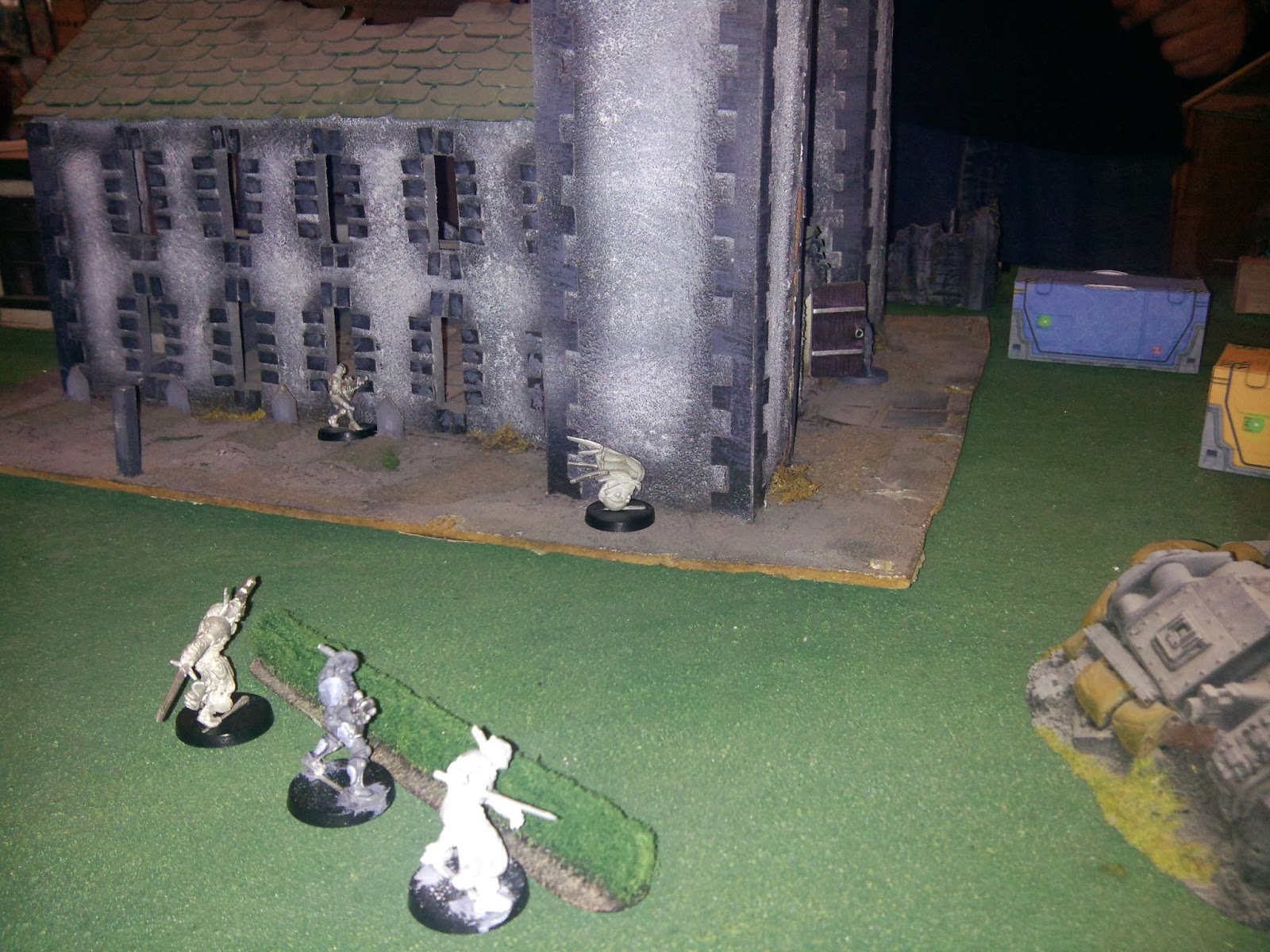 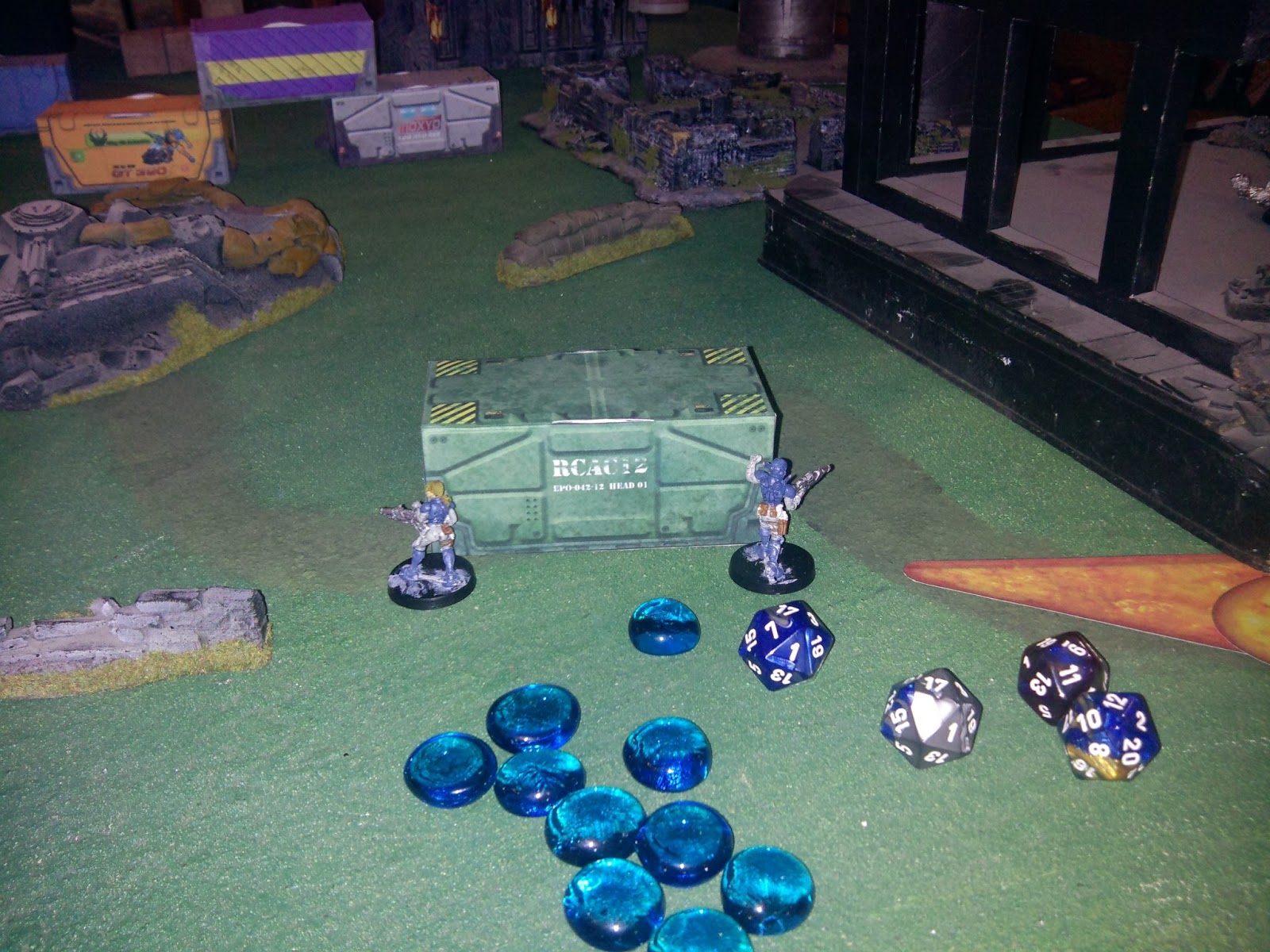 Mike then moved his troops forward, behind the church and the Cargo Containers.  This triggered a couple of Automatic Reaction Orders (AROs) from my troops, but caused no casualties.  Finally, Mike’s Sniper finally popped out on the 2nd floor balcony on the building in his deployment zone, to shoot at my Hacker.  Fortunately, the Hacker’s armor deflected the shot.  Unfortunately for Mike, my Croc Sniper ARO’d his sniper and got a Critical hit, killing Mike’s sniper.  First blood to me!  My Orc HMG suffered a wound and ducked out-of-sight behind the wall she was hiding behind.  I promptly forgot all about her until after my 3rd turn…
Turn 2:
My Sniper and Fusilier on the 2nd floor on the right-side building did a Combined Order and fired at 2 targets (An oops of 2 parts – I realized later I was supposed to fire both at the same target and cut the Burst Rate in ½!).  Giving them each a second order, I killed a Teutonic Knight and the Magister Knight.  Moved the hacker forward to the Church and then moved the Auxilia and Auxbot last.  The Auxilia stayed out-of-sight behind the church while the Auxbot flamed an Order Sergeant, though Sergeant managed to kill the Auxbot with his ARO.


Mike then started his activations.  Joan moved forward and killed my hacker inside the church.  The Teutonic Knight peaked around the corner and shot at the Knight Doc, wounding it, but he suffered a wound from AROs from the Croc Sniper.


Turn 3:
My knights and Orc moved forward to get into the center section.  The Orc got into a dugout but was shot by an ARO, took a wound and ducked down for the rest of the game.  The knights managed to make it into the center band and took cover. 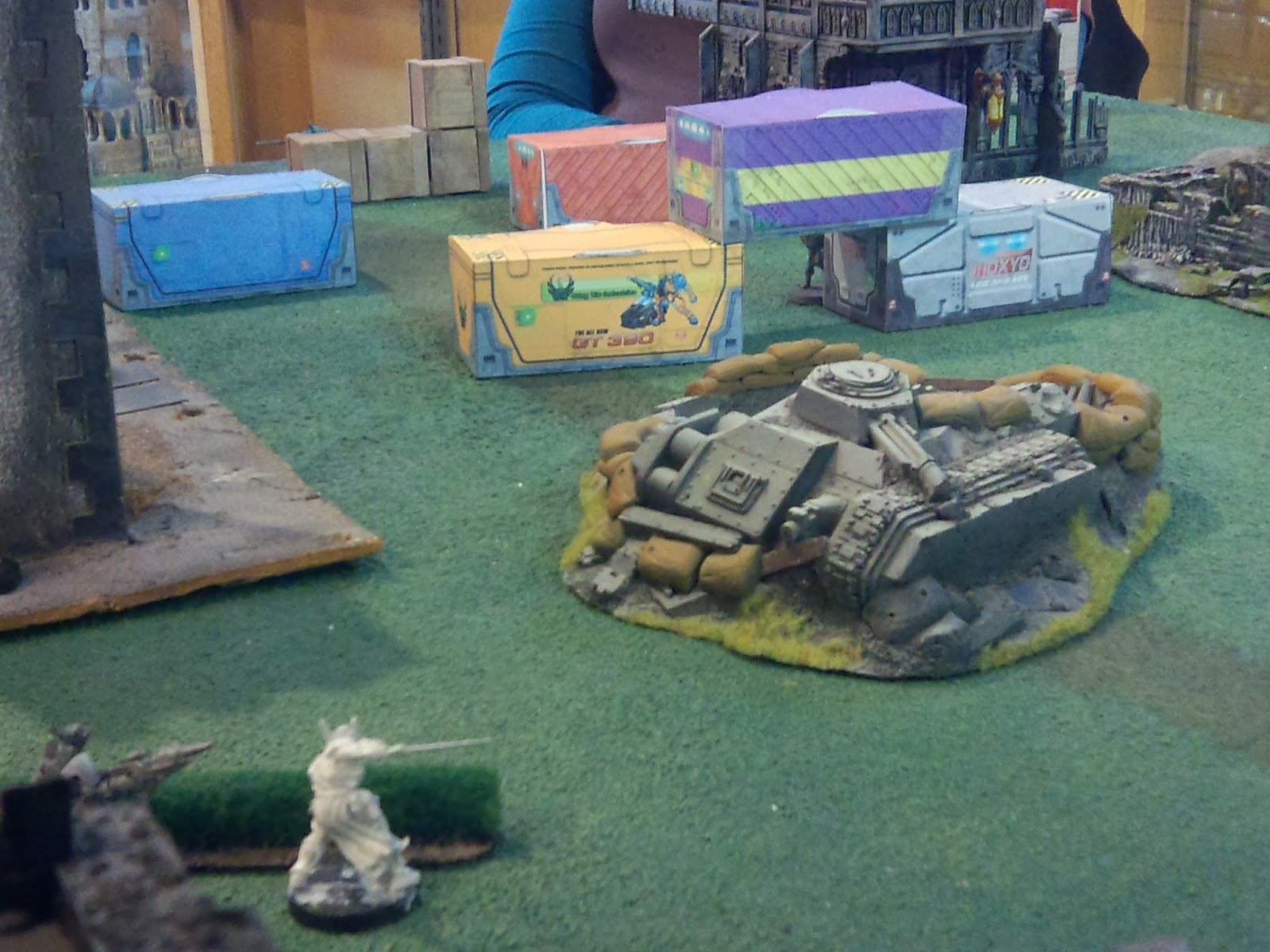 Mike moved someone (Think it was an Order Sergeant) out to shoot at the Orc in the dugout.  The Croc managed to ARO and kill the shooter, but the damage was already done.  Mike then charged Joan and another figure into the Church, managing to kill the Knight Hospitaller and the Auxilia!


So, Army choices: I don’t really have a lot of complaints with my force composition.  It was doing what I expected, I just didn’t win because I did some dumb moves and Mike was able to capture the center in the last turn.  Any issues I had were rules issues.  This is not to imply that Mike and I couldn’t agree – it’s just we were both re-learning the rules and we both had questions and issues.
Things I know we screwed up:


-          The previously mentioned “Combined Orders” Boo-Boo!  We were supposed to target the same figure and reduce their burst size.  This was a “Heat of the Moment” error – neither of us caught it until much, much later.


-          Declaring Automatic Reaction Orders – I was bad for not remembering to declare all of it at once before the dice started rolling. I missed a few possible reactions as well.  This is something that will be fixed with more practice on my part.


-          Somewhere around Turn 3, Mike realized that if you got the cover bonus against the “to hit roll”, you also got +3 Armor.  We forgot this, so we continued not granting the extra 3 ARM as it could have thrown the scores way off.


-          It is a 28mm skirmish game.  I screwed up some basic “Line Of Sight” calls as I mixed up rules between game systems more than once…  (Sorry Mike – rediscovered you were right after I reviewed notes when I got home.


-          Some confusion with the special rules for the individual models.  It’s the same issue 40K has – too many special rules for each and every model type and weapon.  Again, it’s a familiarity thing.  The more we play, the more the rules will make sense.


Terrain deserves special mention.  I got to the FLGS before Mike and setup a 4’ X 4’ area for the mission.  Mike reviewed the table and made a couple of minor changes, BUT there was a huge fire-lane that extended 30+” in front of the Church that neither of us noted before the game.  As a result, I had Mike trapped for a good length of the time in the one corner. The unintentional LOOOONG Fire Lane!
We knew we needed more terrain, I just need to get down to it!  We both agreed the large church needs to go.  Not that we’re anti-Religious (Mike was playing Holy Orders!).  The church just took up too much space and made for a huge killing zone inside.  We would have been better off with 2-3 smaller buildings or (a LOT) more cargo containers.


As to the Tournament Mission itself, Mike and I really enjoyed it!  Making 300 point lists (the OFFICIAL points limit for an Official tournament) and forcing a game to be done in 3 turns forces both sides to move and act.  Both sides have to take chances and this resulted in lots of shootings, AROs and casualties.  Mike was just about at his army’s Break Point at the end of turn 3.  Yet for this mission, casualties had no effect on the outcome.  Fortune favors the Brave (and the SMART!)!!  The random objective gives each side a chance for a bonus point or two, but if you don’t include the required troop choices or options required in your list, you could end up with a mission that you couldn’t complete – a wasted opportunity!  Well done!  I look forward to trying some of the other official tournament missions!

All and all, a very enjoyable game.  Thanks Mike!
Posted by Blind Gunn at 9:08 PM 1 comment: