So real life (especially work) really kept me busy this month. I was only JUST able to get 1 game in with Graham again.

This month, points were 1500. I was pretty happy overall with how my last list did.  I decided to “boost” it just a bit rather than a completely different list. 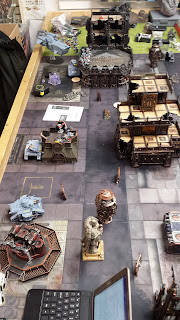 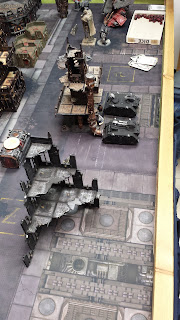 We rolled the Mission Sealed Orders.
Both sides draw 5 Tactical Mission cards but keep them secret until they complete the missions. A command Point can be spent at the end of a player’s turn to discard up to 3 Tactic Cards. Once all the Tactic Cards are gone, player will load up another 5. If necessary, they then load up 4, etc…
Victory Points awarded based on the cards’ objectives/point value. As well, the standard 3 Objectives: Slay the Warload, First Blood and Line Breaker.

Alternating deployment, from my left to right: deployed the 10 Man Grey Hunters on the Landing Platform, with the 6 Man Grey Hunters held off-board using the Wolf Stratagem: Cunning of the Wolf, but their Razorback was deployed on the ground behind the platform, covering an objective. The Stormwolf deployed in the left corner with the Blood Claws, Wolf Lord and Rune Priest on board. The Long Fangs deployed in a Ruin in the center of the Wolf deployment zone, their Razorback beside them on the left. Finally, the Predator deployed on the right side, partially obscured by a . . not sure what it was.

Graham deployed the Death Watch Dreadnought behind a (large) imperial Statue, then both Razorbacks, with their squads mounted inside, behind a ruin closer to the center of their zone with the Captain and 1 Librarian. The rest of the terminators stayed off board, waiting to teleport.

Turn 1:
Space Wolves:
Stormwolf stayed Supersonic and moved more or less straight towards the enemy deployment zone, drawing Line-of-Sight to the Dreadnought. Both Razorbacks moved forward on the left while the Grey Hunters on the platform stood still (there was a reason). The Predator moved to hide behind the ruin the Long Fangs had hid.

Psychic phase was short; the Rune Priest was inside the Stormwolf, so wasn’t able to do anything.

Shooting phase and the Stormwolf unloaded Lascannons and Helfrost at full power onto the Dreadnought. It was enough to destroy the Dreadnought in 1 volley. The Heavy Bolters did 2 points damage to the Razorback with Heavy Bolters. No other shots were possible. 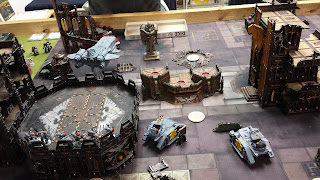 Completed:
First Blood: 1VP
Supremacy: 1VP
Secure Objective 1: 1VP (those Grey Hunters were guarding it!)
Deathwatch:
Both Razorbacks dismount their squads. The Razorbacks both move forward, the Lasercannon hiding behind a Cargo Container, the Bolter behind a central ruin. Both Squads also moved forward, the 1st squad towards an objective within a crater on the Space Wolves left, the 2nd Squad in a line abrest formation, pointing towards the Stormwolf. In fact, pretty much everything pointed towards the Stormwolf. The Terminator Librarian moved ahead of the 1st Squad (he wanted to get in range to cast Smite on the Stormwolf) while the Captain climbed to the 2nd floor of the ruin. Finally, the Terminators (with the 2nd Librarian) teleported to the right of the central ruin, drawing Line-of-Sight to the Long Fangs. 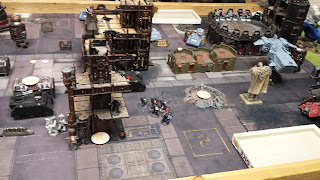 Deathwatch Advance Into The Fray 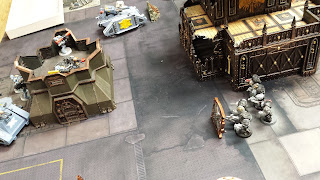 Good thing the Psychic phase did some damage, because Graham maintained tradition and failed to inflict a single wound in spite of all the shooting from his army!

Turn 2:
Space Wolves:
So, the Stormwolf started the turn by going into “Hover” mode, unloading all its Passengers! (Don’t think Graham expected to see that many Blood Claws! He couldn’t pick out the Rune Priest or Wolf Lord until I pointed them out!) The Stormwolf slid over to the back of the Deathwatch deployment zone. The Blodd Claws and HQ moved forward towards Objective 3, in the Crater. One Razorback moved forward for a better angle while the other stayed still to shoot at the approaching Terminator threat. The last Grey Hunter pack came on the table behind the ruin containing the Long Fangs in order to help protect the flank, if necessary, and Objective 6. The 10-man pack moved forward and to the wall of the Platform, hoping for a shot or two. 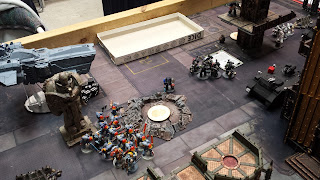 The Stormwolf Unloads Its Cargo! 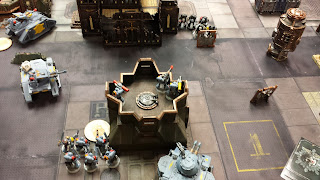 The rest of the Great Company Prepare

In the Psychic phase, the Rune Priest cast smite on the Librarian as it was the closest model to him and inflicted 1 wound! Then the Rune Priest got greedy and cast Jaws of the World Wolf, but rolled Double-1, inflicting a wound on himself and killing a Blood Claw who stood too close!

Shooting phase, the Blood Claws shot their pistols at the Librarian and inflicted 2 wounds while the Long Fangs killed the Terminator with the Cyclone Launcher!

In the Assault Phase, the Blood Claws charged and killed the Librarian, then consolidated into the crater (and onto Objective 3). 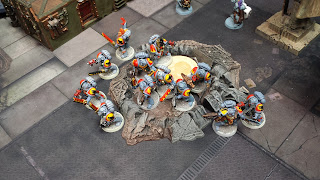 (I made an error here.  If I could have gotten rid of my last card (which I wouldn’t ever be able to complete) for 1 Command Point, then drawn 5 new cards at the beginning of my next turn. I missed that and so wasted a turn, waiting until I could dump a card at the end of turn 3!)


Deathwatch:
I didn’t record that the Deathwatch moved anything this turn. However, the Captain and Squad 1 MUST have moved towards the Blood Claws hiding in the crater.

Well, the remaining Librarian failed to cast Smite, so that was the end of the Psychic phase.

Squad 1 open fired on the Blood Claws, but because of the cover of the crater (and some dismal rolling on Graham’s part), only the Frag Cannon was able to inflict any wounds; it killed 3 Blood Claws. The Captain failed to wound the Blood Claws as well. However, just about everyone else made up for it. A Razorback, a Long Fang and 6 more Blood Claws were killed in the rest of the firing phase.

In spite of the Wolf Lord’s presence, the Blood Claw Survivors were all lost to Morale Test at the end of the turn. 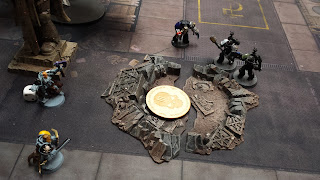 The Blood Claws are wiped out!

Due to the amount of talking and bemoaning and just plain chewing the fat with other gamers, we realized we had to end the game after Turn 3, simply because the store was closing soon and we still had to pack up. Normally, this is a 5-7 Random Mission length game.

Space Wolves:
Probably silly, but I left the Stormwolf in Hover Mode and slid sideways a bit for a better angle. The Grey Hunters on the Platform moved forward and to the rails to see if they could help at all. The other Grey Hunters stood still – waiting to see if they were needed (actually, nowhere to put them where they might be useful). The Wolf Lord and Rune Priest moved forward towards the Terminator Captain and Squad 1.

Predator opens up with all laser cannons and in spite of 2 wounding hits with Lascannons, only manages to kill 1 terminator (rolled a 1 for the first shot and the second shot was over-kill for a wounded terminator). Long Fang took out a 2nd Terminator. The Grey Hunters on the platform were all within long range to squad 1 and after the smoke had cleared, there was no Squad 1! The remaining Razorback fired on the Heavy Bolter Razorback, but failed to damage it. The Stormwolf did better, inflicting 4 wounds to the same Razorback.

In the Charge Phase, the Wolf Lord and Rune Priest both charged the Terminator Captain and managed to inflict 2 wounds. The Captain put a second wound on the Rune Priest.
In the end Phase, I dumped the last Tactic Card for 1 Command Point (This assumed we “might” make another quick turn, but that failed to happen). 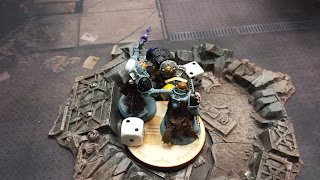 
Deathwatch:
Both Razorbacks moved, 1 to hide from the Wolf’s Razorback, the other to get Line-of-Sight on the Stormwolf. Squad 2 stood still so they could shoot at the Stormwolf without penalty. Finally, the Terminator Captain recalled the remaining Terminators to his side (1 Term with Assault Cannon, and 1 Librarian), ready to charge into Close combat and help him. Maybe.

The Librarian cast Smite on the Stormwolf, inflicting 6 wounds! However, he failed to cast Might of Heroes. 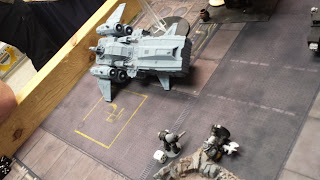 Death of the Stormwolf (and the Librarian)!

For whatever reason, Graham didn’t charge the last Terminator into combat to help his Captain. As Graham cackled with anticipation, I reminded him my Wolf Lord’s Saga allowed him to always strike 1st! 4 attacks, 3 Hits, needing 3s to wound and I rolled 1s and 2s… Graham was relieved then devoted all his attacks onto the Rune Priest, killing him finally. 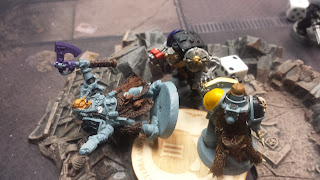 Death of the Rune Priest

We checked the clock, not enough for another turn. Game over.


The Deathwatch's two Squads with Razorbacks gave him the extra fire-power and speed he really was lacking before. I think it was a much better force than last time.

On the Wolf's side, I like the extra fire-power of the full 10-man Grey Hunters, especially with 2 Plasma Rifles in the squad. The Larger Blood Claw pack also made a difference, Harder to kill off and it could take hits and still be useful. Dropping out of the Stormwolf made them more dangerous as they can be dropped off more closely so that I was almost guaranteed a successful charge.

I did misplace the 6-man Grey Hunters. I was afraid the Long Fangs were going to be destroyed in turn 2.As a result, they had no place in the battle. The Predator didn't do too much, but as a threat on my right flank, it did its job.

Posted by Blind Gunn at 9:44 PM No comments: