Once again on the SMS Graf von Zeppelin, the Blucher Dreadnought (and his Flagship), Von Shtupp was out on patrol.  Rumor was that there was an unknown fleet in the area.  A force that seemed to attack quickly, then disappeared.  It all sounded strangely familiar.  Von Strupp just hoped he was wrong…

“Admiral!  The Lookouts have spotted ships on the horizon.  It appears to be a couple of Antarctican Drone Carriers!”

Haven’t played Dystopian for a while.  (I’ve been playing Infinity lately – a friend is preparing for a tournament nearby.)  Anyway, we blew the dust off the figures and decided to try to remember the rules!

This report is probably a week late, but better late than NEVER!

This Battle Report is going to be a little different.  To save time, we only recorded the casualties and things of note.  This was supposed to let us get more “playing time” and hopefully complete more turns! 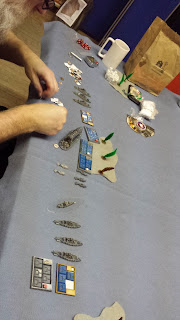 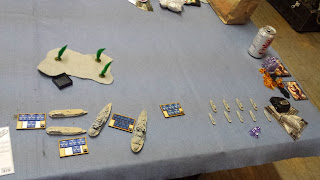 Turn 1:
No TAC were used in the TAC Phase.
CoA won Initiative!

Prussians basically moved forward (except the Carriers who stayed hidden behind an island).  The Prussian Dreadnought turned to bring all turrets to bear, shot and crit 2 Cruisers (One sufferest “Chaos & Disarray”, the other “Weapons Damaged”)! 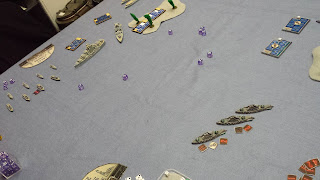 Blűcher Opens up and Platos Suffer! 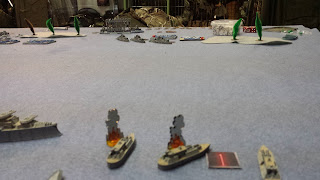 The CoA sank 4 Corvettes with multiple attacks from the Anarctican’s Cruisers, Carriers, Battleship and Frigates!  So much hatred for my Corvettes!!!  (I wonder what his mission is?)

Meanwhile, the Prussians sank a Plato with the Destroyers, another Plato to the Corvettes (before they were sunk, of course), and destroyed 6 Drones!

The New Drone Rules indicate that instead of being stockpiled and launched again in another turn, there is a chance that Drones will be permanently destroyed in the event the Drone was shot down or scrapped!  This is a HUGE change for CoA and Graham had to quickly re-evaluate his tactics! 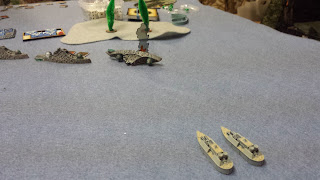 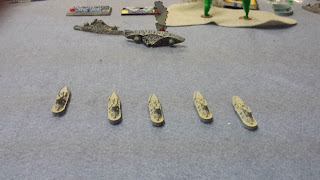 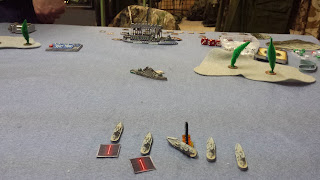 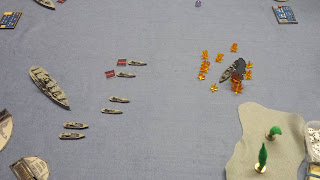 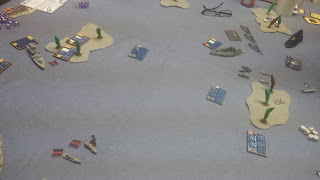 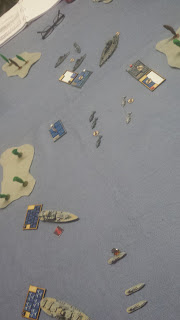 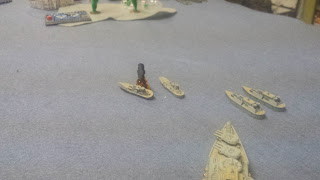 and sink some more... 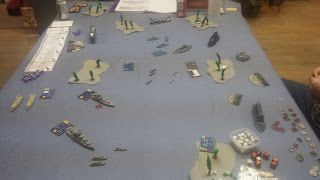 Turn 3:
Prussians played “Radio Intercept”, but it was cancelled by the Anarcticans with “Flank Speed” (60pt Card to stop a 20pt card???  I Asked Graham if he was certain, but he insisted!)
CoA won Initiative.  Again…

This turn, the Anarcticans got off lightly.  They lost a single Frigate that made an attack run on the light carriers, to the other Carrier’s broadsides!

The Prussians lost their last Corvette to Dive Bombers and the last two Destroyers to Battleship and Frigates!  The Dreadnought had played “Devastating Barrage” but the Covenant played “Espionage” to cancel it! 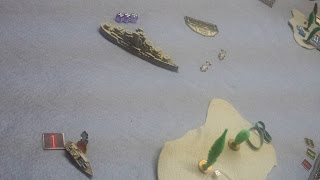 There goes a Destroyer... 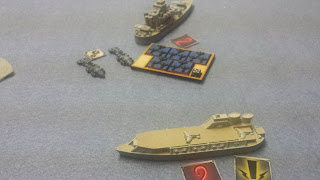 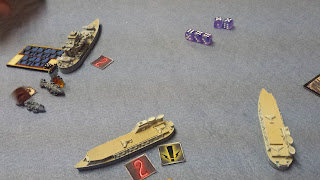 but the Carrier Strikes Back! 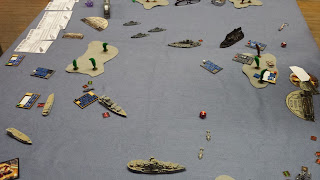 Turn 4:
The Prussians played “Battlefield Repairs” on the Battleship –restoring it back to FULL hull points!  (The Covenant had over-used their TACs and didn’t have the points to stop me from playing the TAC!)

Why change anything?  CoA won Initiative!

This time, the Anarcticans didn’t have much luck (well, they HAD sunk all the small ships).  The Prussians lost only 1 Light Carrier!  Oh, wait!  It gave up extra Strategic Points!!!

The Prussians (well, I) screwed up!  As the Kaiser Karl was closest to the enemy fleet AND expected a HUGE amount of fire in response to having repaired itself, I panicked and moved it first.  Karl sank 2 Frigates and a Cruiser by itself.  Two squadrons of Torpedo Bombers sank another Cruiser, but because I mobed the Battleship first, I blocked Line-of-Sight (sorta) to the last Cruiser!  As a result, the Dreadnought couldn’t fire its secondary weapons and its primary weapons counted as “Obscurred”, resulting in half the dice per weapon!  As a result – we didn’t even damage the last Cruiser. 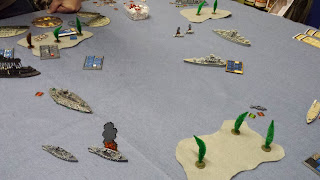 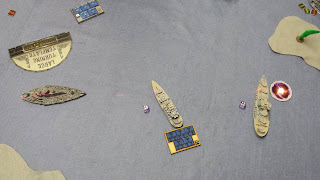 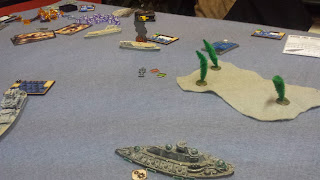 But still sinks a Carrier! 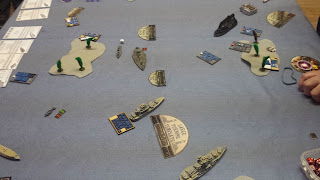 Game was called on account of time at this point.

WOW!!!  Could it get any closer?!?!?
Technically, neither of us completed both our missions, but CoA at least was half way there.  If I could have had 1 more turn, I “probably” could have sunk the last Cruiser, getting me over 50% AND all the Mediums.  On the other hand, I would probably lose my other Carrier and Graham would have won, or worse, both drew a Draw anyway!

I did screw up with the dreadnought, so I have no one else but myself to blame.  I pretty much knew that my smalls were the targets after Turn 2, but I couldn’t have hidden them fast enough to save them, so I opted to go out fighting.  Besides, all together the smalls were worth just over ½ the 500pts he needed to win.  The rest of the fleet was tougher to deal with.

We did get an extra turn, but we were also interrupted multiple times by observers and friends stopping by to chat.  Doing a stream lined report did save some time, but I don’t know if it was worth it.  I sort of miss the details.

What do you think?

Posted by Blind Gunn at 9:37 PM No comments: