Admiral Dimitry Orlov was relaxing in his cabin on the Russian Borodino-Class Battleship, Georgy Pobedonosets II ("St George the Victorious II").  It was good to be home once again, back at sea.

Once more, Orlov was being sent to the Britannian Embassy to partake in some war games.  He dreaded these games as there was no glory in defeating an allie in a wargame, but penalties for failure were real (what with the Russian Political Police). 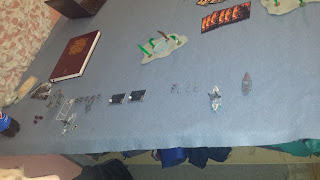 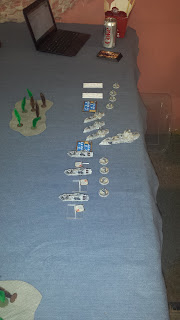 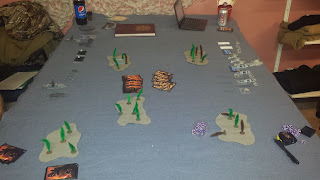 The Start of Game

After deploying terrain and fleets, we drew our random mission cards.  Neither side liked the mission they drew, so we both announced we were doing the default 70% of the enemy fleet mission.  Blah!

Turn 1:
No Cards played during the TAC phase.

Russians started things off by moving a squadron of fighters forward, over the island on their side.  The Britannian War Rotor turned to starboard, stayed in the clouds and moved towards the table centre.  Russians wasted an activation by moving the other fighter squadron forward, moving beside the other squadron over an island.  By this point, my opponent realized I was killing activations and started moving his fighters to prevent me from getting a decent shot at something valuable…

Having nothing else that I could “waste”, I moved the two Russian Strike subs forward (submerged).  A squadron of Britannian Frigates moved forward and fired on the subs, but were unable to damage the submerged Russian ships.  The squadron of Frigates on the east side moved behind the island, out of sight of the Britannian forces (with much harsh language from the Britannians, I might add.  Do you sing the Queen’s Anthem with that mouth?).

Britannian Fighters moved to join the previously moved fighter squadron over the island in their deployment zone.  Russian Frigates in the west moved to Port (mostly to get out of the Battleship’s way and to avoid getting rammed).  The western Britannian Hood moved forward, turned to port and damaged one of the Skyships with long-ranged turret fire.  To stall for time, the Russian Cruisers moved forward their minimum move.  The Britannian Frigates on the west side moved around the corner of an island but found their weapons were all out-of-range.

Running out of things to move, the Russian Command Ship moved out, trusting in the Tzar, God and Ablative Armour to keep her safe.  Though she was able to get the Lord Hood into gun range, the Range Band 3 Salvo failed to damage the (lucky) Battle Cruiser.  The western Britannian Battleship charged forward like a hound released from its leash and fired on the Russian Battleship.  Surprisingly, the Jammers stopped ALL torpedoes from hitting the Russian ship while Ablative Armour once more prevented damage to the great ship!

For the last activation of the Russians, the Skyships stayed hidden in the clouds, moved forward and fired on the Lord Hood.  Once more, the there was no damage caused to the Britannian Battle Cruiser.  Commander has a horse shoe hidden somewhere on that boat!

With the Russian Activations complete, the Britannians were able to activate their remaining fleet without worrying about Russian Retaliation.  The other Lord Hood moved out and fired on the damaged Skyship, but failed to damage it.  Finally, the last Britannian Battleship played “Stoke the Engines” and moved straight forward to get into range on the Russian Fleet.  Sadly, they were unable to damage anything this time.

Ironically, the only Victory Points this turn were for the Russians as a result of them allowing the TAC to be played on the Britannian Battleship! 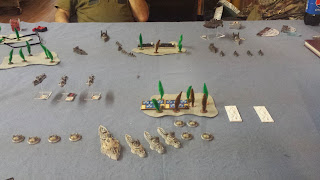 Turn 2:
In the TAC Phase, the Britannians played “Radio Intercept” (rolled +1 for their Intiative roll) while the Russians played “Espionage” and discarded the Britannian’s “Battlefield Repair” TAC!  20VP each!

Britannia won the initiative – by 1!

Britannia started things off with a bang!  A squadron of fighters “jumped” a squadron of their Russian contemporaries, and successfully shot down 2 token!  For a loss of 5!  The entire Britannian squadron was wiped out!

The Russian Battleship failed its Sturginium Boost roll (does it ever pass it?) and moved forward at maximum speed towards the Hood Battle Cruiser, and crit the Britannian warship (Generators offline), though the Battleships secondary guns failed to cause any damage.

Of course, the Russian Subs failed their Maneuver test and were caught on the surface by the Britannian Frigates who formed up a perfect Cross-fire for their torpedoes at Point-Blank-Range, before realizing they were too close for torpedoes!  Oops!  It didn’t matter, the turrets made quick work of one (sank with a double-crit) while the other was damaged.  Ther ferocity of the attack shocked the surviving Sub Commander and the sub failed its Disorder test!  First Blood to Britannia! 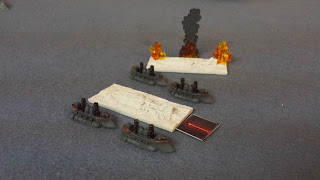 The Russian Cruisers failed their Sturginum Boost roll, but managed to move forward far enough to get the damaged Hood into Turret range.  When the smoke cleared, the Hood was gone!  Russia’s First Blood! 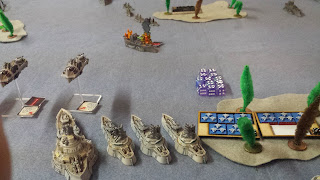 The remaining Hood Battle Cruiser prepared for a Hit-And-Run attack; turned to port and crit the damaged Skyship (Weapons damaged), then continued forward, hopefully out of arc of any retaliation.

The eastern Russian Frigate squadron popped out from behind the island and sank 1 frigate, damaged another but failed to damage the Hood with their mortars. 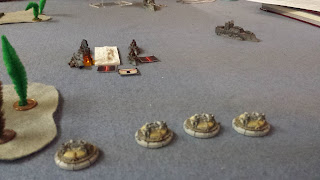 The eastern Britannian Battleship turned to starboard and opened fired on the Russian fleet.  Two Frigates were damaged but the sub was undamaged!

The remaining full-strength Russian Squadron attacked the remaining Britannian Fighter Squadron and shot down 4 tokens for a loss of 4 tokens which left both squadrons with a single token each!
On the west side of the battle zone, the Britannian Frigates moved forward and managed to damage another Skyship.

The Skyships  moved forward, dropped mines in front of the Britannian Battleship and made a turn to starboard, then spotted one of the Frigate Squadrons (only 1 spotted token, sadly).  The Skyships’ guns failed to do any damage.

The Britannian Battleship got its revenge by turning to starboard, avoided the mines and destroyed one damaged Skyship, crit a Cruiser (Guns Damaged) but failed to damage another Cruiser.  The Skyships failed their Disorder Test! 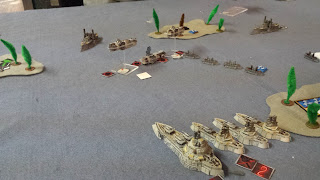 The Western Frigate Squadron sort of hid behind the main fleet line, but using the Spotter token, managed to sink one frigate with Indirect fire (the first time ever I can think of that the Russians successfully used Indirect fire)! 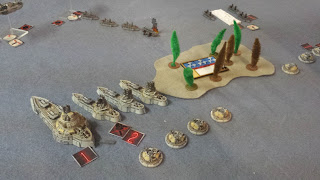 The Britannian War Rotor turned to starboard and attacked the surfaced sub, but once more, the sub escaped damage.

In the End Phase, the Britannians had nothing to repair or roll for.  The Russians successfully repaired the Cruiser’s guns and then we started to roll to recover from the failed Disordered tests.  The Skyships lost 2 AP on the damaged Skyship, but the Russian Sub was down to 1AP & 1HP after their roll!  The Sub was almost lost!

Turn 3:
In the TAC phase, the Russians played “Radio Intercept” (got +3) and gave the Britannians another 20 easy points.

(For the Russians, this was the “all or nothing” turn – I NEEDED 1st turn for my plans to work.)

While it looks like the Russians are doing well, the opposite it true.  In order to win, I would need to sink, prize or Derelict 2 of the 3 Battleships and War Rotor.  So far, I wasn't making ant headway there...

The Commodore took first activation and did something I always forget to do; I declared the Commodore’s Order!  “Sturginium Overload” – All ships with Sturginium boost automatically pass their test; all without get +1” movement anyway!

As the Commodore was on the Battleship – away we went at Full Speed!  At RB2, the Battleship got a Crit on the western Britannian Battleship (Engines Damaged) ( JUST missed a double-Crit) and sank a Frigate.  WHAT?!?!?!  IS THAT ALL???? 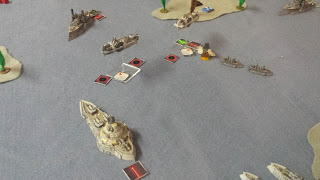 The Britannian Frigates on the east moved forward, sank a damaged Frigate and successfully boarded the surfaced sub!  Realizing that keeping the sub as a prize would leave his ships (and the sub) vulnerable to more boarding this early in the turn, the boarding parties all returned to their ships and left the Sub a Derelict! 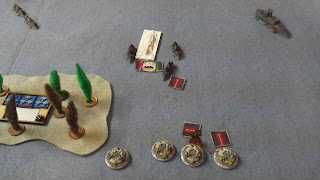 The Russian Cruisers moved out and played “Devastating Barrage”, which was cancelled with Espionage (more points for the Russians) and while the Turrets failed to damage the Battleship, the broadsides successfully sank another Frigate. 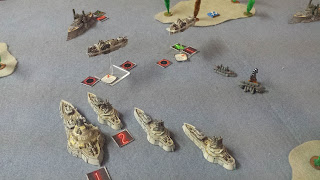 The War Rotor made a 180 degree turn and moved forward.  Gunnery failed to damage 1 Skyship, but the War Rotor managed to Baord and Derelict the other Skyship for a loss of 4 AP.  The remaining Skyship failed its Disorder test! 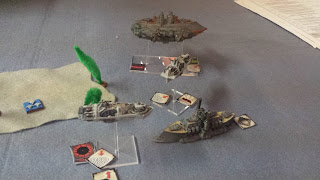 Frigates on the east moved towards the last Hood and successfully damaged the Britannian Battle Cruiser.  The Hood got its revenge by ramming and sinking 1 Frigate, then shot and sank another Frigate! 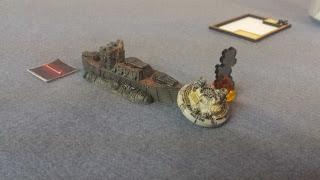 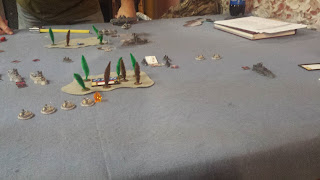 ..Then Sank a Frigate!


The other Russian Frigates moved quickly towards the hood, but failed to damage it, though the mortars did sink another Britannian Frigate.

The eastern Britannian Battleship was forced to run over the linked mine – there simply wasn’t enough room to maneuver away in time.  Sadly, the linked mine wasn’t powerful enough to damage the great warship.  The Battleship then damaged the last Skyship, a Frigate and removed the Ablative Armour off a Cruiser!

For their last moves of the activation, the Russian Fighters “buzzed” towards the War Rotor (with no real hope of damaging the beast).  The remaining Britannian Frigates sank another Russian Frigate. 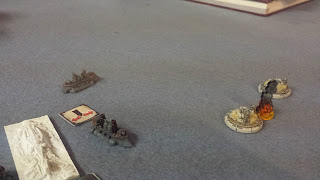 In the End Phase, the Britannians repaired the Battleship’s Engines and the frigates lost 1 AP to the Disorder Test.  The Russian Cruiser repaired its defences but the Skyship lost 3 AP!

At this point I capitulated to the Britannian Commander, but we rolled to see who would get next turn anyway to see what would happen.  The Britannians won the init, moved their Battleship forward and blasted the Russian Battleship at Point-Blank-Range, which caused 3 Crits!  Two from Turreted attacks and 1 from Broadsides! (Raging Fires, Chaos and Disarray, Shredded Defences).

At this point, there was no doubt that the Britannians would win the battle.  It would just be a matter of time.


Nasty Battle.  I knew the Russians were in trouble as soon as I saw Graham's list.  3 Massive/Large choices are always difficult to deal with and with only 1 Large choice on my side, I was overwhelmed.

I need to re-evaluate the use of Battle Cruisers.  I've not used them because I consider them sort of a "Glass Cannon"; unable to take significant damage.  However, Graham's use has shown how they can be used effectively.  I still think a single Battle Cruiser is too weak, but multiples makes your opponent split his fire (not to mention an extra activation is always nice).