So, this was the final mission in the first section of the campaign called “Nowhere To Run: Darwin”.

The Japanese have changed their tactics and are resorting to High-Altitude Bombing with multiple escorts.  Fighters of the American 9th Fighter Squadron give chase.

The Altitude is HIGH-BOTTOM. This changes the handling characteristics of both fighters and bombers (the bombers, not so much).

For the Japanese Zeros, they’ve dropped from stats “A4+3” to “B4+1”.  A loss of 2 Agility and a lesser maneuver chart!  The P40s dropped from “B4+2” to “C4+0”.  Climb rates for both fighters were cut in half!  Apparently, both dove (or fell out of the sjy) just as fast as before, so the Americans had the advantage there.

The Japanese had 9 Betty Medium Bombers in 3 flights of 3 “V’s” with 2 flights of 3 Zeros (one flight east, the other west of the bombers) acting as escort.  Mission: Get the bomber off the table!  (Japanese get VPs for each bomber that makes it to base).

The Americans have 2 flights of four P40 Warhawk fighters.  Mission: Shoot down the Bombers! 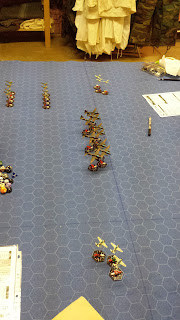 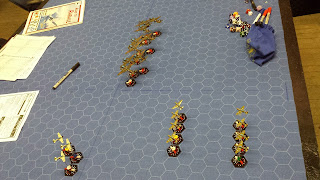 Deployment!
American Extra Rules: Can’t remember!  I forgot to write it down!
Japanese Extra Rules: Combat Stress – One Random Betty suffered Airframe damage but became a Veteran crew!  This ended up becoming Bomber 7 – one of the leaders of a 3-ship V formation. 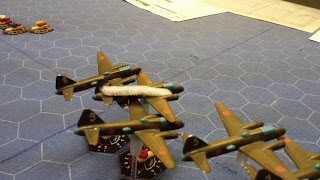 Betty 7 Becomes Vet, but Damaged!
Turn 1:
The Betty bombers move towards home (pretty much all they’ll be able to do all game).

Zeros on the east side of the formation are too far out of position and turn left, hoping to intercept the Americans in a turn or two. Or three. Or…

The other Zeroes move straight, ready to intercept the Americans.
The front formation of P40s split, two went after the bombers, two went to buy time by engaging the Zeros.

Guns blazing, and the fight was on!

One P40 was shot down going head-to-head with Zeros, but managed to damage a Zero in the exchange of fire!  Another P40 shot down one of the Bombers. 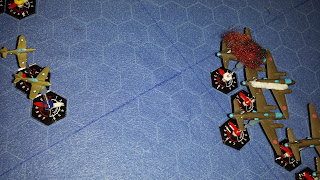 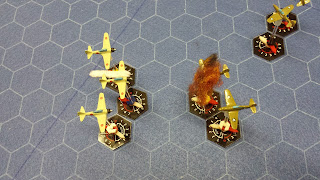 Two planes shot down and 2 damaged at the end of the first turn.  And it would only get worse! 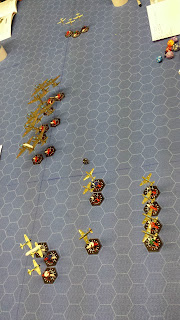 Turn 2:
The Americans failed to damage anything, but the Zeros shot down another P40! 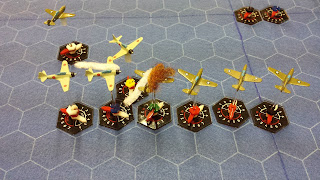 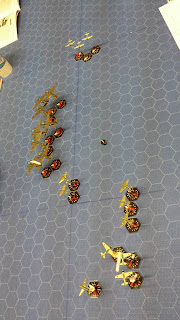 Turn 3:
Things didn’t appear to be going well for the Americans.  2 more P40s were shot down and this time a Bomber caused Engine Damage to another P40.  The Japanese lost another Bomber, this time the Veteran Crew in the damaged Bomber #7. 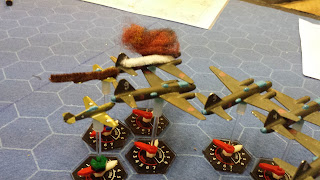 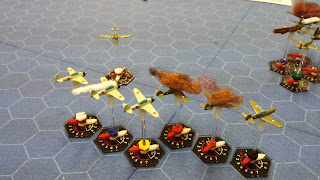 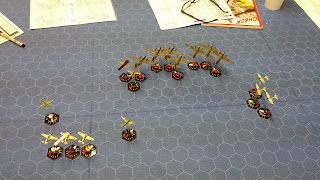 Turn 4:
The Americans started putting on the pressure and successfully shot down another Betty Bomber. 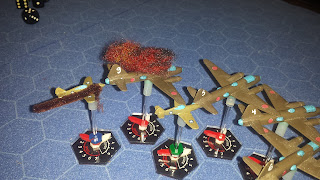 Another Betty Bomber Shot Down! 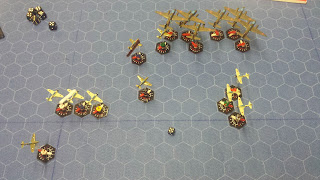 Turn 5:
The American pressure was starting to yield results; 1 more Betty Bomber was shot down this turn and another bomber damaged for no loss to the Americans! 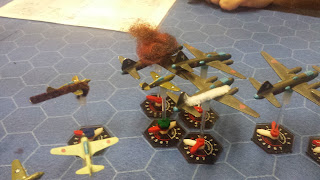 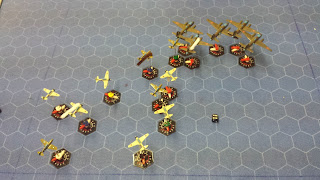 Turn 6:
The Damaged Zero dove to disengage this turn.

The P40s managed to damage another Betty, but the Zeros shot down another P40! 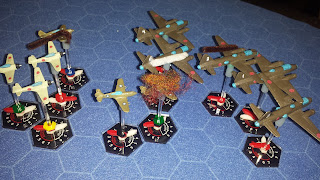 Another Betty Damaged, another P40 Shot Down! 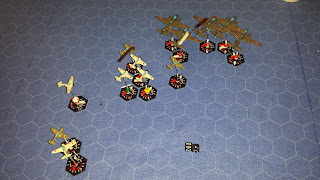 End of Turn 6 / Start of Turn 7
Turn 7:
The Zeros went to close in once more on the Americans, but the remaining P40s suddenly dove and disengaged, leaving the Japanese alone… 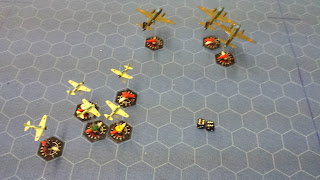 At this point, 4 Betty Bombers had been shot down, 2 damaged and 3 undamaged and 1 Japanese fighter was damaged.  Rolling to see what happened to the damaged aircraft, both bombers and the Zero crashed (dismal rolling on my part).

Great Battle.  It looked like the Japanese might pull off a Victory, but the Americans pulled off a couple of good hits in the end and the bombers crashed (counting as kills)!  Those 2 bombers made the difference between American & Japanese Victories!

Now, If you’ve read my earlier reports, you know the Campaign Book is split into multiple Mini-Campaigns.  This was the last mission of the “Darwin” missions.  Checking these battle reports, the Americans won 3 missions, the Japanese 2.  Per the Campaign Rules, winning 3 or 4 missions is worth 1 Campaign Point.  Winning all 5 missions is worth 2 Campaign Points.  Thus, the Americans are in the lead with 1CP vs 0CP for the Japanese.

Port Moresby Campaign is Royal Australian Air Force vs Japanese Nave – almost all Fighter vs Fighter missions.  There are a couple with Japanese VAL Dive Bombers thrown in for a change of pace.

Wewak Campaign is back to the US Army Air Corps taking on both the Japanese Army & Navy Air Forces.

The final campaign at Rabaul is the US Marines and Navy taking on the Japanese Navy and Army, with US Army Long Range Bombers thrown as well.

Anyway, I hope you’ve enjoyed this write-up!  Now go paint some figs and have fun!
Posted by Blind Gunn at 8:05 PM 1 comment: